The career of Charles Bukowski should give encouragement to any writer who starts to apply themselves late in life to writing. He was 49 when he finally quit working at menial jobs, including as a filing clerk at a post office. As he said :

“I have one of two choices – stay in the post office and go crazy … or stay out here and play at writer and starve. I have decided to starve.” 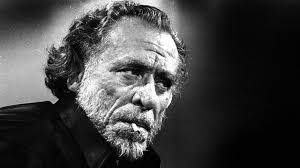 He’s sometimes been referred to as the ‘laureate of American lowlife’, and he was certainly familiar with the seedy side of poverty. An inveterate drunk, he turned his experiences into a script which was filmed as ‘Barfly’, starring Mickey Rourke and Faye Dunaway.

He penned an amusing Roman a clef called ‘Hollywood’, in which he wrote of the making of the film adaptation of ‘Barfly’, using pseudonyms to disguise the names of the actors.

Bukowski’s weariness with the world meant that he said a lot of truthful things, in what sounds like a cynical way. Even his gravestone is cryptic, with the inscription ‘Don’t Try’. What he intended with this advice was explained as being waiting for inspiration to write something – one shouldn’t try, shouldn’t force work out of one’s system – if it doesn’t come naturally, leave it.

His poem ‘So You Want To Be A Writer’ explains his philosophy well, and should be read by anybody aspiring to be a writer.

‘So You Want To Be A Writer’