I sometimes worry about repetitive strain injury to my right wrist, when I feel the muscles tensing after twelve hours of manipulating the mouse. I once knew a woman who had to have an operation on her wrists to correct carpal tunnel syndrome. This is a painful medical condition in which the median nerve, which travels through a passageway in the wrist called the carpal tunnel, is compressed. Her job was thought to have caused the condition – sorting eggs into trays and egg boxes at a chicken factory farm. She was a keen web surfer, and the combined strain of repetitive use of small muscles with her arms extended made them seize up.

As I’ve just bought a new laptop, I wondered about getting an ergonomic mouse. For the last few years, I’ve been using a wired optical mouse. A small travel-sized mouse came with my old laptop, and I was pleased that it caused less cramping than a conventional mouse. Made in China, they don’t last long, about two years of clicking, scrolling and sliding.

My laptop is on an over-chair table, my right hand and forearm resting flat on the mouse mat. I haven’t developed carpal tunnel syndrome yet, but pressing the median nerve against the edge of the table for 16 hours daily sometimes makes my fingers tingle; I give up then.

The best-known makers of ergonomic mouses are Logitech and Kensington and they’re pricey, but no-name vertical designs that are supposedly better for the hand start at £5.50: I bought one and it’s brilliant! No more aches and pains. On eBay, Kensington Orbit Elite models are available from £20 – £50

Microsoft sells a similar trackball model for about £100:

Then there are various designs of finger-mounted mouse!

Many sellers fib, calling their mouse ergonomic, simply because it has a swoopy design, even though the controls are conventionally located.

Do any of you use an ergonomic mouse?

Staying safe online is a concern for all of us.

I went over to the Linux operating system a few years ago.

Like most people, I learnt how to use computers with Microsoft Windows. This o/s has its advantages, but security isn’t one of them. Although I’m extremely careful about preventing malware infections, I still got clobbered a few times, once so seriously that I had to delete everything on my hard drive by making a clean re-install of Windows. Fortunately, I’d backed up most of my work on memory sticks and in the cloud, but I still lost a lot of work.

Linux Mint is a different atmosphere. I have a basic firewall installed, but no antivirus apps. It’s rare for there to be virus attacks on Linux. I feel safe.

Nevertheless, as is the way with online life, it’s impossible to avoid intrusion. Everyone is watching everybody else.

I’ve just found a way of deleting myself from snooping sites I didn’t know had my details:

It’s worth running a check. My name was on twenty sites I’d authorised, such as email and those connected to my blog, but somehow, a sports stadium in Orlando, Florida knew about me—how? I deleted a dozen other watchers, including a company who sell a reproofing compound for sports car soft-top rooves, a marmalade manufacturer and a marine insurance broker!

This is more weird than threatening, but it goes to show how commerce steals your details to prosper—and to sell on.

My entire life has been dominated by books—reading them, writing them and teaching others how to read them, including adults with literacy problems.

Reading is a joy for life. I feel sorry for anyone who misses the pleasure. You need look no further than the incumbent of the American presidency to see what it does a person’s character if you don’t read.

Whatever your opinions on the pros and cons of reading from a printed book or its digital version, I’d hazard a guess, that these days, even people who proclaim that they don’t read books actually read more words daily than people did 25 years ago—thanks to computers and smartphones.

I’m currently on a cusp between going back into self-publishing and being traditionally published, should Hachette’s The Future Bookshelf deem my Cornish Detective as being sales worthy. I entered their open submission process on the spur of the moment, surprised to be asked for my full manuscript.

Maybe I should be feeling more uptight about the possibilities than I do, but my pragmatism and work ethic (where did that come from?) means that I’m keeping my head down, nose to the grindstone and not worrying about success and failure.

Overall, I’m happy that people are still reading books, and it doesn’t matter to me how they do so. It would be great if some readers were enjoying my books—as much as I do! In a way, looking at publishing, I’m surprised by the persistence of the traditional way of doing things, particularly from the stance of being a writer. Self-publishing an eBook takes minutes on KDP, with your first earnings paid two months later. Traditional publishing takes two years to accomplish the same thing.

In the 21st-century, people expect instant access to many things. Just look at the success of fast food, comparing the similarities to downloading eBooks or music files. Now think of traditional sit-down dining in a restaurant, a leisurely activity comparable to the way that publishers produce their books to be consumed. On that basis, it’s amazing that books are still printed, that it hasn’t become an activity for the elite.

But, there’s a cyber hawk on the horizon, which may do away with the effort of reading eBooks and hard copies. A while ago, I made a facetious comment on the Colony, about books being injectable.

It turns out, I may have been prescient, for Elon Musk proposes that people have an artificial intelligence chip implanted in their brains

Like any form of technology, it will be advertised as being of benefit to one’s life, making things easier and simpler—essentially appealing to the laziness within us—and, you’ll be superior to those who don’t have it.

Would you put your brain under the control of a megalomaniac?

I’m sure some people will be willing to so, ignoring the potential dangers.

It all makes me wonder what skills people will have in 50 years, as everything will be done for them, including thinking! They will be Borg. 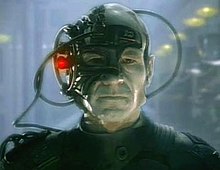 Staying on relatively safe advantages of having a chip in your grey cells, it would mean that a ‘reader’ could have books downloaded into their noddle, allowing them to spout forth quotes and information with as much understanding of the meaning as a computer or smartphone.

If you had a library of digital books stored in your brain, able to access the information within them, would you be deemed to be intelligent?

I previously posted in praise of Rich Reading which takes an effort to savour: if books are going to be downloaded into our brains, how are we to appreciate them?

We’re already in a situation where people don’t grow their food, don’t cook it any way but in a microwave and we don’t make our own clothing, throwing it away when it needs repairing. Driving a car will no longer be a skill, as the car does it for us. Few know how to build their own home or how to make a repair. How many of us can do mental arithmetic these days?

I can do all of these things, partly because of growing up poor, but also because I wanted to know how things work to satisfy my curiosity.

The way the future looks with Elon Musk’s proposal is that curiosity will be redundant….don’t think for yourself, we’ll do that for you.

How do you feel about injectable books?

You could finally get around to ‘reading’ the seven-volume, 4,215 pages of Marcel Proust’s À la recherche du temps perdu.