I’ve just started reading The Horseman, by Tim Pears, which is the first part of a trilogy of stories set in the world of working horses on farms in the West Country in the early 20th-century. I have a wide vocabulary, but in the first ten pages, I encountered a dozen words new to me, mainly to do with saddlery and blacksmithing. The pacing of the action is slow, contemplative and absorbing, so much so, that it’s impossible to gallop through the page. Pears arranges words poetically. This Guardian review comments on the dense texture of the language used by the author.

Personally, I don’t mind slow reads that entice me into thinking about what’s going on. It’s not necessarily a formula aimed at making huge sales—as I’ve previously commented, many bestsellers are written at a level a 10-year-old could understand—but such rich writing is definitely in the running for literary prizes. Tim Pears‘ eleven novels have won at least six awards.

I read another award-winning novel recently, The Orchardist, by Amanda Coplin, which happily took me six weeks to get through, slowed not by unusual language, more savouring the depth and breadth with which the author explored the internal dialogue of her characters, as they contemplated their relationships with loved ones, wondering what to do to make things right. I’ll remember them for a long time.

I may have developed a liking and a tolerance for rich writing, by tackling the intimidating Thomas Wolfe as a teenager.

Wolfe was wildly prolific, given to dashing off vast novels on whatever came to hand…receipts, menus, tissue, proper paper—only loosely organised into chapters, leaving the hard work for his publisher to do. He only published four novels in his lifetime but is the only author to have left two completed novels with his publisher before dying, one of which was one million words long. Reading Look Homeward Angel at the age of 17, I was struck by how voluminous his descriptions were of places, a real cosh to the senses, as sights, sounds and odours crowd around the reader. Truman Capote dismissed Wolfe’s writing as, “all that purple upchuck”, but William Faulkner described him as the greatest writer of their generation.

Try this description of food, which makes me feel like going on a diet!

This style of writing has fallen out of favour in the 21st-century, where there’s pressure to move the action forward, especially in much of genre writing, though Fantasy and Science Fiction allows an author to linger as they build worlds. I’m currently enjoying Ursula K. Le Guin’s Earthsea: The First Four Books, which has thrown me into an alternative realm of islands set in an uncharted ocean.

Robin Hobb’s Farsee Trilogy also immersed me in a world that was both familiar and unfamiliar.

We’re advised to ‘kill your darlings‘…which means one sometimes has to eliminate flowery sections where you were showing off, but what if that perfect little bouquet of a phrase adds to the atmosphere of a paragraph? You might be striking out something that readers would have loved, that became quotable.

In my crime writing, I emulate authors such as James Lee Burke and Dennis Lehane, who include plenty of their protagonist’s internal dialogue and observations on people and places they interact with, where the landscape and weather become characters, making the reader feel that they’re there with the detective—not simply following the actions of a cartoon character.

Good fiction creates empathy. A novel takes you somewhere and asks you to look through the eyes of another person, to live another life.

If I edited my manuscript with word count as a priority, I’d remove some of the flavoursome ingredients in favour of a fat-free, low calorie, ready meal of a story consumable by the masses and with no nutritive content.

No one wants to make their story difficult to digest, and it’s not necessary to use complicated words that add density to a text, but surely we can write in a way that makes our readers think about something differently and which leads to them learning something new? As a child, I learnt much of what I know from reading books and looking up word meanings in dictionaries—I continue to do so.

An International Literacy Association report published in 2017 suggested that sometimes reading should be hard.

If all someone reads is bland pap, what are they going to learn? Concentrating and persevering with a challenging read rich with ideas will create a sense of achievement—even if you disagree with what’s written!

How do you deal with what to leave in and what to take out?

Have you ever written anything that was too stodgy? I did, with my first Cornish Detective novel, which had too many information dumps, as I tried to explain the thinking of a traumatised war veteran turned serial killer. Trimming 40,000 words helped it flow rather than stagnate.

Are there any authors whose work you love for its concision, devoid of tasty morsels? I love Elmore Leonard’s crime stories, but he really makes the reader do the work of imagining what’s happening, following his own cryptic advice:

Which book overwhelmed you, by being too richly written? 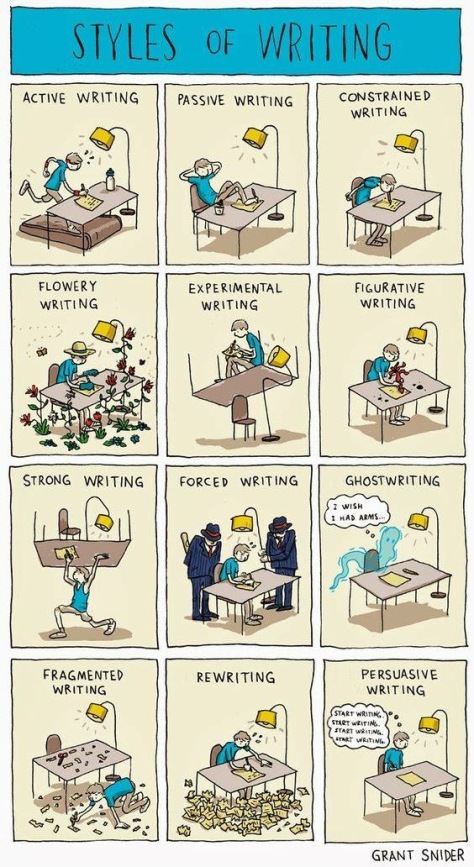