1a: a peculiarity of constitution or temperament: an individualizing characteristic or quality

b: individual hypersensitiveness (as to a drug or food)

2:characteristic peculiarity (as of temperament)broadly: ECCENTRICITY

I use idiosyncracies as a way of making readers remember my characters. It’s easy to confuse characteristics with idiosyncracies. I think that characteristics are more behavioural traits whereas idiosyncracies are peculiarities that make a person unique. Thus, my crime series protagonist Detective Chief Inspector Neil Kettle’s characteristics include a warm and nurturing management style, being happy to delegate tasks and he encourages interaction with his team by leaving his office door ajar. His idiosyncracies stem from being Green politically and having a rebellious artistic nature: he paints (partly to achieve breakthroughs in investigations), is growing a wild garden and rides a ten-foot-long chopper motorcycle—useful as a stealth vehicle, as no one thinks he’s a copper.

If you think of successful fictional characters, many show idiosyncracies that identify them. In the crime genre, Sherlock Holmes uses recreational drugs—cocaine and morphine—to escape, what he calls “the dull routine of existence.” Rex Stout’s investigator Nero Wolfe grows a bewildering variety of orchids and loathes travelling and exercise. Andrea Camilleri’s Inspector Montalbano is a gourmet, known to interrupt an investigation in favour of having a decent lunch, for, after all, a corpse will be just as dead once he’s dined.

If a character has lots of idiosyncracies, then they’ll be labelled eccentric. Good examples include Ignatius J. Reilly from John Kennedy Toole’s A Confederacy Of Dunces, Sairey Gamp in Charles Dickens’ Martin Chuzzlewit spouts proverbs, always carries an umbrella and has a peculiar fragrance “borne upon the breeze, as if a passing fairy had hiccoughed and had previously been to a wine-vault.” Jerzy Kosiński’s Being There has a protagonist Chance the gardener raised away from society tending to the plants of his wealthy boss. When he dies, Chance is released into the outside world for the first time, which he does not understand. His innocence makes him a celebrity.

What idiosyncracies do your characters have?

Have you created any eccentrics? 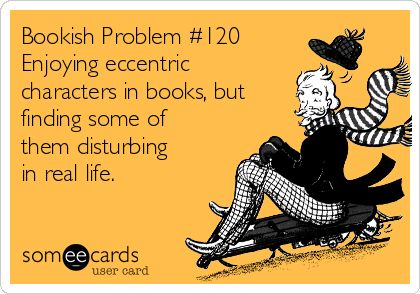