Tomi Ungerer was an author, who specialised in illustration. He was versatile, making work for children and adults that includes delightful tales, protest posters and books, advertising, surreal cartoons, erotica and autobiography. 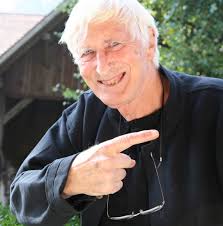 He’s good at taking a satirical view on things, and his images are compelling, humorous and occasionally unsettling. For such an enormously talented artist, his work and name are not as well known in the English language as they should be. Thankfully, many of his books are being republished by Phaidon, including the lovely children’s stories.

From ‘The Three Robbers’

Ungerer’s observational humour on human relationships, including power struggles and the search for loving fulfilment, is amusing and well observed.

Tomi Ungerer tried his hand at farming in the early seventies, which he later turned into a book called ‘ Far Out Isn’t Far Enough’. This has some beautiful illustrations of the landscape of Novia Scotia, as well as some gritty depictions of rural poverty and life and death. This title was used for a film about his life.