As an ex-librarian, I understand the pressing need to free up shelf space. A lot of new books are published every year, as we writers understand from the competition we face.

A book’s return date label is good evidence of how popular it’s been, and with only so much room in the reserve stock basement, many titles end up in the library book sale or donated to charity.

They are deaccessioned, which sounds painful!

Some of the ripest titles appear on Awful Library Books, a site devoted to the weird, tasteless and downright bad books that shouldn’t have been bought or even written in the first place.

I found this example of fantasy fiction, written by Marian Engel, where a librarian enters into a sexual relationship with a bear! I like to include animals in my stories as wild creatures and pets, as they’re good indicators of a character’s personality, but this is taking things a bit too far….

What would Paddington, Rupert and Pooh Bear make of it all! 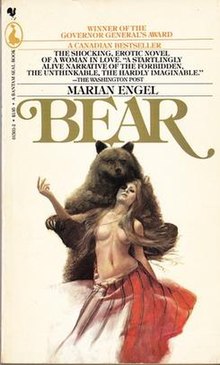