All of writing is full of doubt. We journey along a lonely trail, beaten by phantom pillows that come out of nowhere, making us agonise over such trivial things as which font to use, should there be a comma there and is that word one word or is it hyphenated or even two separate words?

When it comes to larger issues, such as deciding on the theme of your story, pondering whether that would appeal to readers, then you’re entering fortune telling territory. Apart from the blows that sap your ego, it’s easy to stray into booby trap territory. Giving yourself leeway over plots is a wise attitude to have from the outset, for, after all, there are only so many stories that can be told, but what about details you think are original? In a fit of apprehension, I checked that my protagonist detective Neil Kettle’s name hadn’t been previously used in a crime series I’d never heard of, pleased to find it was mine alone.

Mind you, with the lack of perception that sometimes envelops me, in my last novel I only noticed that I’d called one character Mungo and another Bengo 70,000 words into writing the story. Typical Cornish young men, one was a surfer, the other a scuba diver. I felt like an idiot for not noticing the similarity of their names, realising that that itself was the solution—I made them cousins—doubt evaporated!

As for finding anything certain to believe in, when it comes to the totally imponderable side of publishing that actually decides the fate of my book, it feels to me like forcing myself into a warehouse stuffed from floor to rafters, with the very pillows of doubt that have been biffing me about as I wrote the manuscript. I can’t see which way to go, and all I can do is tackle what is in front of me at the moment, eviscerating various pillows to find a load of largely irrelevant stuffing about blogging, tweeting and the best way to crawl to query a literary agent. Should I return to self-publishing, (which I first did in 2014), even though it feels like emptying a bucket of water into an ocean of other ebooks? 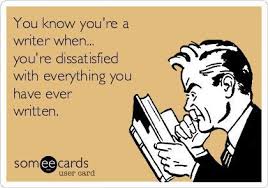 The weird thing is, that even successfully published authors who’ve made a decent living from their work are still stricken with doubt. As dogmatic as ever, Ernest Hemingway said a couple of things that acknowledge his own and all of our uncertainties:

“We are all apprentices in a craft where no one ever becomes a master.”

“The first draft of anything is shit.”

“It took me fifteen years to discover I had no talent for writing, but I couldn’t give it up because by that time I was too famous.”

“And by the way, everything in life is writeable about if you have the outgoing guts to do it, and the imagination to improvise. The worst enemy to creativity is self-doubt.”

Brian Patten wrote an enchanting love poem called ‘Doubt Shall Not Make An End Of You’ whose opening lines I sometimes recall when faced with doubt about the progress of my WIP and what will happen to my Cornish Detective series:

Doubt shall not make an end of you
nor closing eyes lose your shape
when the retina’s light fades;
what dawns inside me will light you.

I console myself by remembering that I’ve got this far in my writing by determination and whatever glimmer of a talent I have; I can go further, even though I’m unsure of which direction to take. It’s up to me to illuminate my stories by using my imagination, dragging them out into the light for others to see.

Essentially, doubt is a cloud on the horizon. Sure, it may rain on you a bit, but what if it blows away to reveal the sun?

How do you handle doubt?

(It’s a writer’s companion, not their enemy)