Many famous authors have used one or more pen names, and there can be all sorts of good reasons for the subterfuge – not the least, evading the taxman!

I used several noms-de-plume when I was writing magazine articles back in the 20th century, and sometimes these were provided by the journal involved, where various writers penned articles as a columnist with an established identity. One of the strangest gigs I had was as an Agony Aunt for a women’s magazine. I got the job through having I’d trained as a marriage guidance counsellor and volunteered as a Samaritan, and from growing up surrounded by women knew more about the medicinal use of yoghurt than most men…

When I started writing fiction again in 2013, I cast around for what to call myself. I have nothing against my own name of Paul Whybrow but wasn’t sure how memorable it is. There are a couple of other Whybrows who are writers, though they’re not related to me – one is Ian, a children’s author, the other Marian and she concentrates on art books.

I chose something that I thought would distinguish me from the norm, and which might stick in people’s minds. I had a couple of eccentric great-uncles when I was a child. One was called Edgar, which I didn’t fancy as a name, the other was Augustus, which I liked partly because of my favourite Roman emperor. I have ancestors who came over in the Norman invasion of 1066. Their family crest featured various elements, including a strange red heart shape with a devil’s forked tail looping upwards from the pointed base. 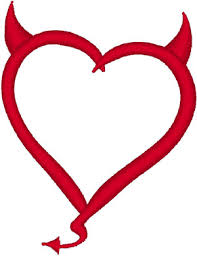 I’d used this shape as a mascot on crash helmets for years, and for signing artwork, so Augustus Devilheart I became (stop laughing at the back!), which I thought worked OK. After slow sales for my ebooks, several female friends advised me that some readers might be finding my pen name intimidating, thinking that I was a devil worshipper—so why not try my real name? I did, and it helped, though it was a real pain to have to change all the manuscripts, deleting them from the online sales sites and uploading the new version.

In trying to establish Augustus Devilheart as a creative entity, I’d joined various social media sites using that name. Some of these were easier to alter than others, and I found to my consternation that Goodreads would hold onto my nom-de-plume forever. They don’t allow authors to delete books published using a pen name. This made me think of them as more intelligence-hungry than the FBI, KGB, CIA and MI5 combined.

I was assiduous in saying that a book had been previously published using the pen name, by adding a note to the frontispiece and on my blog and social media site profiles. I rather thought that I’d left my former identity behind, until I received a spooky contact update from LinkedIn on my Paul Whybrow Gmail account, asking me if I knew Augustus Devilheart? Well, do I?

Have any of you had problems with pen names?