I’ve completed a third campaign of querying agents and I sort of got into it, in a masochistic way.

Initially, I fired off a salvo of 13 submissions, including a couple to newly promoted agents who are looking to add to their roster of clients. To my great surprise, one answered within 48 hours, which is the second fastest response I’ve had from 650 queries made in the last three years! It’s also only the fifth personalised reply I’ve received, the rest being form letters or nothing at all.

Her reply was polite, though contained a strange choice of words:

I’m afraid this isn’t for me.  The writing didn’t quite pull me in and the plot seems a little too outlandish, for my tastes.

I’m unsure what she means by “a little too outlandish”—would slightly outlandish work? Or should I go for the opposite of outlandish, which is conventional? And, what’s a conventional crime plot anyway? Do readers want something predictable? Strangely enough, although the book I’m querying The Dead Need Nobody contains some strange incidents, they’re mostly based on real-life crimes that have occurred in Cornwall in the last five years. I worried that I was being too humdrum, not too weird! 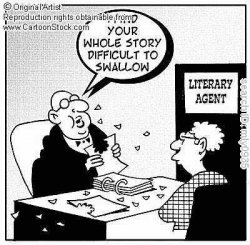 I almost didn’t query this particular agent, as of her seven clients, only one has written a crime novel, but she said she was looking for “crime or thrillers driven by a compelling lead“,  so I thought I’d offer her my mesmeric Cornish Detective.

This rejection had me wondering if there was some form of coded language used by literary agents, so did an online search, finding this amusing article, which ranks replies from agents on a scale of 0-10.

Digital publishers look to be more open-minded and flexible in their approach than conventional agents and publishers, who come across as hidebound. Ebook publishers are more hit and run in their marketing, whereas approaching a conventional operation somehow makes me feel like I’m a raw recruit trying to join an army who’ll slowly manoeuvre their ranks into a campaign to capture readers. I used to be dubious about digital publishing—why give away 50% of your royalties when you can self-publish and keep most of it? But, I’m coming around to their maverick ways.

Whatever option I choose, including self-publishing, I remain undaunted.

Have you ever received any peculiarly worded rejection letters?