Do you have a conscience about what you write? By that, I mean do you ever pause to reflect that your fictional story might have a harmful effect on a reader?

Obviously, we can’t anticipate exactly what will upset someone. A vegetarian might well be horrified at reading about the protagonist of a story butchering a chicken before cooking and eating it.

When writing details of crimes and forensic dissection in my novels, I’ve occasionally wondered why people like reading about such terrible things. I re-wrote a scene where a serial killer recalled strangling a child, simply because I’d put in too much detail of how to kill someone using a garotte. Instead, I made the act horrific by the killer’s quiet contemplation of how he’d proceeded, looking for any mistakes he’d made that might have given him away. Even worse, in a way, was that he derived no pleasure from the girl’s death, for she was simply a pawn in a bizarre roleplay game

British band The Jam released a song called ‘That’s Entertainment’ in 1980, in which lyricist Paul Weller laconically contemplated the sometimes violent distractions that we use to pass time, dismissing them with a chorus of “That’s entertainment, That’s entertainment.” We’re all observers and the observed in these days of CCTV, and as long as whatever nasty thing is happening doesn’t involve personal harm to us, then it’s a form of entertainment.

The Anarchist’s Cookbook is one of the most controversial books published. Dating from 1971, it’s been variously suppressed and freely available, even for sale on Amazon. Because it details how to manufacture explosives and make and distribute drugs, it’s been implicated in criminal acts, which historically has led to simply possessing the book being a prosecutable offence.

I don’t know that anyone would read The Anarchist’s Cookbook as entertainment, but it’s a good example of that old excuse about ‘putting an idea into someone’s head’.

Over the years, many novels have been implicated in real-life crimes. Mark Chapman was obsessed with J.D. Salinger’s The Catcher in the Rye, quoting from it in his defence for shooting John Lennon. President Reagan survived being shot by John Hinckley Jr. who’d also read Salinger’s book. It’s impossible to guarantee that a fictional work, be it a book or a film, will never pass from entertainment to inspiring a tragedy:

I could be cynical, by saying that such dreadful events must have done wonders for sales of the book which planted a demon seed in a criminal’s mind, but I wouldn’t want anything that I wrote to mislead those open to suggestion. Think how horrifying it would be if a criminal stated they’d been inspired by your writing to devastate a community.

One of the founders of the BBC, Lord Reith, proclaimed that the aim of the new television company was to ‘Inform, educate and entertain’—though he never said in what order those things should happen. These days, the educational content of much broadcasting is minimal, while information is manipulated through spin and false news. The entertainment factor is often mindless, bubble gum for the brain—which is preferable to the disgusting violent images available online that ghouls post for fun.

I’m mindful of Reith’s words when I write my Cornish Detective stories, trying to set a scene by the use of facts, and letting the reader into my characters’ thought processes while indulging in some showmanship through humour and enjoyable word choice to keep them reading. One of the pitfalls of novel writing was identified by Iain M. Banks,

“The trouble with writing fiction is that it has to make sense, whereas real life doesn’t.”

So, does that mean that if I create a convincing story which sweeps the reader along, then they might be influenced into breaking the law?

Although I love writing crime stories, exploring what makes the good and the bad tick, I still question why I’m tackling such nasty things. When I do slow down, I remember a Roger McGough poem, called Survivor:

I think about dying.

the end of the world.

keep my mind off things.

Do any of you worry about how your stories are not so much entertainment as instruction manuals for the gullible?

Have you changed anything you’ve written, as being too explicit or offensive?

Have you ever read anything, that you thought was too shocking to have been printed? 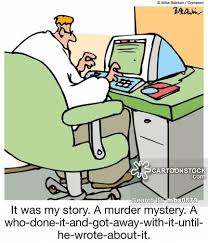