I was thinking about which authors I love, that I wish were more widely read, after finishing a novel by John Williams. He’s been acclaimed in recent years, finally receiving recognition for his wonderful story Stoner.

Set in academia, the plot sounds slight, concerning the career of an English professor and his dutiful ways and thwarted love life, but the writing is powerful and memorable.

John Williams only wrote two volumes of poetry and four novels, which were all different in subject matter. I recently enjoyed Butcher’s Crossing. This would probably be classified as a Western, and shelved in that genre in a bookshop, owing to its 19th-century setting, but it’s writing of the highest order. There are no gunfights, but plenty of gore; it reminded me of Moby Dick in the way it portrayed a man’s obsession and flawed relationship with Nature. John Williams is definitely one of The Good.

Bad writers are legion, and, unfortunately, they often prosper. I’ve pilloried Jeffrey Archer before on this blog, so won’t go into a rant. Sufficient to say, the man is a scoundrel and horse-whipping is too good for him. For those of you not familiar with his loathsome career:

He writes with the skill of an illiterate ten-year-old, yet his novels have sold millions. It goes to prove that it’s not what you can do, but who you know that counts when seeking recognition. His contacts in the business world helped to launch his career, saving him from bankruptcy.

As for The Meh, writers who are lauded but who leave me cold, there are quite a few. Sadly, they often write what is known as ‘Literature’. By that I mean, more than anything, they are taken seriously by critics, win awards, appear at literary festivals as the main attraction and their opinions are sought on global affairs. They’re admired for their intellectualism, but their ability to tell a story leaves me going ‘huh?’

Something tells me, that Jonathan Franzen, Paul Auster and Douglas Coupland would have a hard job telling a decent joke, and I’m not sure I’d want to be seated next to them at a dinner party.

Who do you love, hate and feel apathy for?

(I just had a thought—perhaps one’s reading tastes would make a perfect predictor of compatibility in a romantic relationship!)

An article in the Guardian newspaper made me think about what books I’ve recommended, and given as presents to friends over the years.

I’ve read several of the titles mentioned, and one of them Stoner is a favourite of mine. It was recommended to me by an American friend three years ago, so I borrowed it from the library and absolutely loved it. Written by John Williams and published in 1965, it was poorly received at the time but has since been reappraised and is now lauded for its depiction of human truths. It’s currently being adapted into a film, and I hope that they do a good job.

Some books take you by surprise, and one of them is a novel that I would never imagine as being to my taste owing to its subject matter. Although I’m spiritual I’m not religious so a novel about the relationships in a Mormon family wouldn’t have been my first choice. I read several favourable reviews of it in 2010, so gave it a chance—and was mightily impressed! The Lonely Polygamist by Brady Udall is a memorable tale of relationships within a family, being humorous and tragic. It’s excellent at depicting the loneliness of the human soul and how we throw ourselves into liaisons for temporary comfort. I gave four copies of it as Christmas presents last year, and am keen to hear what my friends think of it. 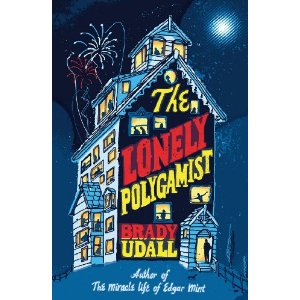 Lastly, I’d say that any collection of short stories by Guy de Maupassant is worthy of your time. I think he’s still the best short story writer ever, and he packs more about the human condition into a few pages than some writers do in a whole novel. I like his novels, but the shorter form is where he excels. I’ve given many copies of this Penguin collection Selected Short Stories to friends and lovers over the year. They’re good stories to read out loud in bed at night!

Sometimes I’ve given books to friends not just because I enjoyed them, but to help them through a difficult period in their lives.

One of these is Margaret Craven’s I Heard The Owl Call My Name, which tells the story of the last days of a terminally ill young priest sent to a remote settlement to tend the native population. He’s unaware of his limited lifespan, which has been kept from him by his bishop. He learns much about life and love before dying. That sounds depressing, but the short novel is a life-affirming read.

Another is a novel called The Maytrees, by Annie Dillard. This is a tale about the mysteries of marriage, as well as the nature of forgiveness. I gave it to several friends whose long-term relationships finished unexpectedly, leaving them to face life alone. The story is a wise reflection on who our soulmates are, and how we sometimes need to maintain a certain distance to appreciate the value of the closeness we crave.

Books can be many things to us, including thrilling, inspirational, educational and amusing. But they’re also a source of great comfort.

Remember: one day readers will be passing our stories on…

To keep my spirits up as 2018 morphed into 2019, I watched one of my favourite feel-good films—2001’s Amélie—it’s very French, charming, good-natured, funny and made with love.

My DVD came with an extra disk of bonus features, including an interview with the director, Jean-Pierre Jeunet. His previous film project was Alien Resurrection, which meant a long time in America shooting and editing, so he was glad to return to his home country. Casting around for what to do next, he wanted a change of pace, a “small movie” set in a Parisian neighbourhood with not too many actors.

Based on his experience in Hollywood, Jeunet used test screenings for his new project, which weren’t in common use in France in 2001. To his surprise, audiences and discussion groups loved the film. Instead of making a movie that appealed only to the French, he’d somehow tapped into a tale that moved audiences worldwide, and the foreign rights were sold for 45,000,000 francs.

This made me think about what appeals to me in storytelling. I like small stories, where the action takes place somewhere with a strong sense of location, featuring only a few characters. Sprawling epics with a large cast of players certainly have their place, though it can be tricky to convey the humanity of the participants. For me, the best parts of The Lord of The Rings saga are the scenes where the characters talk face to face about their love of home and their fears, not the huge battles or monstrous baddies gnashing their teeth.

As for much-touted High-Concept plots, the term immediately implies to me that the story is driven by a pitch that sizzles attractively, but the story itself might lack characterisation and any real meaning. I want to be in the characters’ heads, not marvelling at the twists and turns that confront passengers with snakes on a plane. Cheap thrills are OK up to a point, but I prefer something that feeds my soul. Small stories may be low-concept, but subtlety is nourishing.

Some of my favourite reads have been small stories set in a distinct place with characters melded with where they grew up. They’re novels that could be filmed without special effects.

* The Hook Men by Timothy Hillmer

Until I read this story, it hadn’t occurred to me that people were employed to recover drowning victims from fast-flowing rivers. Comparisons with James Dickey’s Deliverance are justified, not only for the location but also the themes of masculinity and honour that are mythological in their power.

* The Ploughmen by Kim Zupan.

I’ve praised this novel before, choosing it as one of my favourite reads of 2017. It’s one of the best small stories I’ve read containing an all-too-good hero and an implacably evil villain. Again, the protagonist is a rescuer/recoverer, finding travellers lost in the snow…while the antagonist, a contract killer, ensures people are lost to life forever.

* A Whole Life by Robert Seethaler

This story would appeal to anyone who enjoyed John Williams’ Stoner,  as not a lot happens, and when it does, it’s in a low-key way that’s hugely transformative. Just a man living his life as best he can, trying to do the right thing and sometimes failing.

Influential acting coach Stella Adler, in her book The Art Of Acting, said: “There are no small stories, only the actor makes them small.”

I’m inclined to think that the same thing is true of writers. Small stories can contain huge themes. Being small implies that there will be relationships that are developed, a certain intimacy that lures the reader into feeling something about what it means to be human.

A quality that Amélie and the three books I mentioned share, is that despite containing dark elements, there’s also positivity and even joy. I try to do the same thing with my Cornish Detective novels, where my protagonist decompresses the tension created by investigating horrific violence by painting watercolours, listening to music and creating a wild garden.

Are any of your favourite books small stories with huge messages?