Since returning to creative writing six years ago, I’ve scrambled up several steep learning curves to do with the business of writing. These include formatting, book cover design, marketing the ebooks I self-published on Smashwords and Amazon and the all-important lessons of how to write a synopsis and query agents.

I made another round of supplications to the ‘gatekeepers’, in February, after spending the previous two months editing my fifth novel. As any writer knows, that feels like wading through porridge, but there’s still a discernible feeling of achievement in having polished a manuscript.

I’m at a stage where I feel like I’ve created a potentially commercial product—which is how I’m increasingly coming to view my novels—rather than taking joy in them as a readable story. Despite this confidence, I know I’m a nobody, an unpublished author looking for his first publishing contract. Any marketability I have comes from where I live in Cornwall, which is popular as a holiday destination and from being the location of the successful television adaptation of Winston Graham’s Poldark stories.

I know that some bestselling authors are poor writers, but what makes me mad is that if my manuscript was submitted to the gatekeepers by a media celebrity (who’s already got fame and wealth), then it would be snaffled up immediately. Commercially, it’s the way of the world in publishing that someone with an existing high profile, a ‘platform’, will be more attractive a risk than someone anonymous who will take more effort to promote—but it still makes me mad!

It’s proof that no one cares what you’ve written. Would-be readers are more enticed by already knowing who the author is, than anything to do with the quality of the story. As an example supermodel/supertwit Naomi Campbell has ‘written’ several novels and biographies—I don’t know if she’s read them!

That’s what makes me angry—realising publishing is a business and has little to do with art.

This article in the Independent newspaper struck home with me:

Do you hear a voice when you read this? That might be more normal than you think

Research suggests that 80% of readers hear a ‘voice’ when reading a story, with only 11% denying that they heard an inner voice at all.

This made me wonder about how much to tailor the conversations in my novels, giving them a sprinkling of dialect, while avoiding spelling words phonetically. My crime novels are set in Cornwall, which has its own language, rich Celtic culture and a distinctive accent. Here’s a good example of it:

As mentioned in the video, there are emmets a-plenty in Cornwall. These are incomers from out of county, mainly holidaymakers who swarm around like ants, giving the locals much of their income from tourism. Many stay and settle. Some of my fictional characters are Cornish born and bred, while others have moved here. This has caused me a certain amount of head-scratching in how to differentiate their accents and attitudes.

Over the years, there’s been some fuss made about how the Cornish accent is spoken in television dramas. An adaptation of Daphne du Maurier’s Jamaica Inn was panned because the cast mumbled their words making them hard to understand. The hugely successful new adaptation of Winston Graham’s Poldark stories has gone the other way, with most of the actors avoiding anything that sounds like a West Country burr. Only the farm labourers, the ignorant unwashed oiks attempt an ‘ooh arr, yes sur‘ country bumpkin way of speaking.

Do any of you hear voices when reading a book or while writing characters? 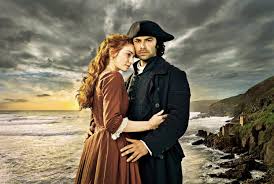