I was thinking about which authors I love, that I wish were more widely read, after finishing a novel by John Williams. He’s been acclaimed in recent years, finally receiving recognition for his wonderful story Stoner.

Set in academia, the plot sounds slight, concerning the career of an English professor and his dutiful ways and thwarted love life, but the writing is powerful and memorable.

John Williams only wrote two volumes of poetry and four novels, which were all different in subject matter. I recently enjoyed Butcher’s Crossing. This would probably be classified as a Western, and shelved in that genre in a bookshop, owing to its 19th-century setting, but it’s writing of the highest order. There are no gunfights, but plenty of gore; it reminded me of Moby Dick in the way it portrayed a man’s obsession and flawed relationship with Nature. John Williams is definitely one of The Good.

Bad writers are legion, and, unfortunately, they often prosper. I’ve pilloried Jeffrey Archer before on this blog, so won’t go into a rant. Sufficient to say, the man is a scoundrel and horse-whipping is too good for him. For those of you not familiar with his loathsome career:

He writes with the skill of an illiterate ten-year-old, yet his novels have sold millions. It goes to prove that it’s not what you can do, but who you know that counts when seeking recognition. His contacts in the business world helped to launch his career, saving him from bankruptcy.

As for The Meh, writers who are lauded but who leave me cold, there are quite a few. Sadly, they often write what is known as ‘Literature’. By that I mean, more than anything, they are taken seriously by critics, win awards, appear at literary festivals as the main attraction and their opinions are sought on global affairs. They’re admired for their intellectualism, but their ability to tell a story leaves me going ‘huh?’

Something tells me, that Jonathan Franzen, Paul Auster and Douglas Coupland would have a hard job telling a decent joke, and I’m not sure I’d want to be seated next to them at a dinner party.

Who do you love, hate and feel apathy for?

(I just had a thought—perhaps one’s reading tastes would make a perfect predictor of compatibility in a romantic relationship!)

Do any of you make an appearance in your own book?

In Hollywood films, the director Alfred Hitchcock famously made cameo appearances, usually glimpsed walking through a street scene. Naturally, these were uncredited, and Quentin Tarantino, Martin Scorsese and Peter Jackson have continued the practice.

The authors of books adapted into movies have sometimes made cameo appearances on-screen. James Dickey, the author of Deliverance, turns up as a sheriff at the end of the film, who is deeply suspicious of the surviving canoeists’ story. Stephenie Meyer can be glimpsed in Twilight, Steven King pops up in many of his movies, and John Irving (The World According to Garp), William Peter Blatty (The Exorcist) and Peter Benchley (Jaws) all show their faces. Even John le Carré can be spotted as a guest at an MI6 Christmas party in Tinker, Tailor, Soldier, Spy.

Musicians often appear on one another’s records, not always credited. This commonly happened when they were starting out as session musicians and weren’t yet famous names. For example, James Burton, guitarist for Elvis Presley, appeared on dozens of hit records in the 1950s.

In literature, famous authors have appeared in novels. Siegfried Sassoon and Wilfred Owen, the WW1 poets star in Regeneration by Pat Barker. The Quickening Maze, by Adam Foulds, tells the story of poet John Clare’s incarceration in a mental asylum. Colm Tóibín covers five years of Henry James’ life in The Master. There are many, many more, but authors rarely write themselves into their stories. Stephen King did so, introducing himself as an author writing about a gunslinger in the Dark Tower series. Bret Easton Ellis wrote Lunar Park as a mock memoir of his own history of drug use. Douglas Coupland makes himself a data thief in JPod.

In preparation for writing the fifth novel in my Cornish Detective series, I’ve been re-reading the first four stories. I hadn’t looked at The Perfect Murderer for 27 months and had forgotten that I’d inserted myself as an anonymous character in a scene. This is set in a pub at Sunday lunchtime, with the landlady, who’s also a detective sergeant, is checking her customers. She’s part of a team hunting a serial killer, who is a master of disguise, using his altered appearance to stalk his victims. He’s the thirty-year-old man wearing tinted spectacles. I’m the elderly bearded gentleman reading a book—something I’ve done many a time in pubs!

Mary skimmed the drinkers for new faces. She liked to play host, and sometimes the foreign visitors were unsure of the protocol for ordering food and didn’t know that the pub offered reasonably priced accommodation. She recognized several Dutch tourists who visited every winter as part of a twinning association with their town. There were a couple of strangers in, who were keeping to themselves—an elderly bearded gentleman who was reading a book, and a thirty-year-old man wearing tinted spectacles hiding behind a newspaper. She’d pay them a visit and say hello. People responded to her better as a landlady than when she was acting as a detective—it almost restored her faith in human nature.

The elderly bearded gentleman may make an expanded appearance in an upcoming story, perhaps as a witness, though quite how much he’ll resemble me I don’t yet know….

Have any of you portrayed yourself as a fictional character?

Will you, now I’ve suggested the idea? 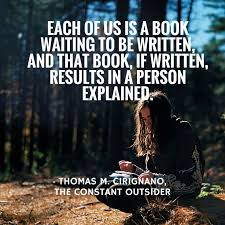