I’m currently reading Pride of Baghdad, written by Brian K Vaughan and with artwork by Niko Henrichon. It’s a thought-provoking story about freedom and oppression, using the device of having a pride of lions escape from Baghdad Zoo during an American bombing raid. Inspired by a true story, it’s received lavish praise which it thoroughly deserves.

Initially, I discounted graphic novels as being glorified comics. Then, I noticed that the film The Road to Perdition, starring Tom Hanks, was based on a graphic novel. I enjoyed reading it and saw how the moody, gloomy artwork inspired the noir look of the movie. This made sense, as film-makers have long used storyboards to lay out the plot in a visual form.

I’ve gone on to read many more graphic novels. I tend to avoid superheroes in lurex bodysuits, though the Brian K Vaughan’s anarchic Runaways gang are fun—imagine having supervillains for parents, who neglected you and whose evil plans you tried to thwart. 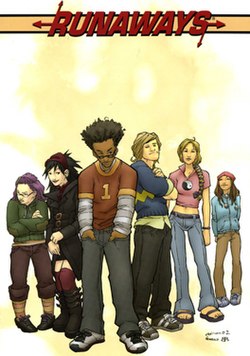 Instead, I look for graphic novels telling tales of real life. Will Eisner, Harvey Pekar, Alison Bechdel, Robert Crumb, his wife Aline Kominsky-Crumb and Daniel Clowes all have something to say about the human condition.

In the fantasy genre, I loved Krampus: The Yule Lord, by Brom, which admittedly is more prose than pictures, but the artwork is astonishing and who could resist a story where Father Christmas is the villain?

I’ve just requested The Arab of the Future by Riad Satouff from my local library, which might help explain the political turmoil of the Arab world to me better than any news report. Graphic novels can be effective in tackling politics, as the stunning Persepolis, by Marjane Satrapi, showed about Iran during the Islamic revolution.

Literary classics have been turned into graphic novels too: I recently read Poe’s short story The Fall of the House of Usher and I liked the graphic novel version of Jane Eyre.

Do any of you read graphic novels?

Any suggestions of what to read next?