I came across a thread on Quora this morning, which set me thinking about which stories are overrated and underrated.

Who are the most overrated authors, and why? – Quora

I’ve previously mentioned which stories I like, which tend to be ‘small stories’.

As for overrated stories and authors, I’ve never been able to take to Herman Melville’s Moby Dick. At a time when we’re more aware of how we’ve endangered the planet, I’m amazed that a story about whale hunting is still revered. I don’t have the life left to waste on reading Finnegan’s Wake by James Joyce which is an experiment in search of a plot. I’m not that keen on stream of consciousness novels, the technique that Virginia Woolf used for To The Lighthouse, which I re-read as part of my preparation for writing my fifth Cornish Detective novel, which features two corpses found near Godrevy Lighthouse. Woolf described her book as a “psychological poem”. Reading about banal characters in tedious situations who never get anything done certainly did my head in—is that psychological?

Years ago, I read many of James Patterson’s Alex Cross series and some of his many, many other series and stand-alones. It soon felt like opening one can of beans after another. It isn’t writing, it’s manufacturing! Using hired gun writers to do the hard work as collaborations doesn’t shift the blame for childish prose.

I don’t read many Romances, but I tried to complete Me Before You by Jojo Moyes attempting to understand why it was so successful as book and as a Hollywood film. Its premise, of a quadriplegic seeking suicide as the ideal solution to his predicament, is repugnant. It says much about the author’s laziness and lack of empathy, that she never even met a quadriplegic before writing her tear-jerking trash. I see that the author is currently accused of plagiarism…I’m not surprised.

You know that feeling you have about a book where you think, “I don’t think I’d like this,” but then you try it and find out you were right, mentally kicking yourself for weakening? Maybe I’ve had that experience too many times. Occasionally, I read a book that provides a pleasant surprise, as with Eleanor Oliphant is Completely Fine by Gail Honeyman which was a breakout debut in 2017. I wish it happened more often.

Which books do you think are overrated and underrated? 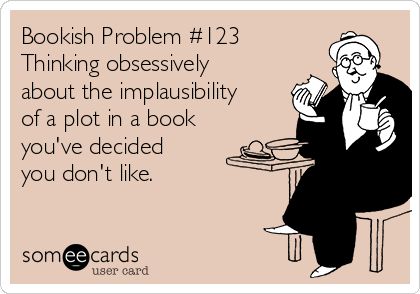