Ghosts in literature are familiar to us—think of Dickens’ A Christmas Carol, Susan Hill’s The Woman In Black, the dead narrator of The Lovely Bones by Alice Sebold, Banquo’s ghost in Macbeth, The Dead Men of Dunharrow in The Lord of The Rings and The Headless Horseman in Washington Irving’s The Legend of Sleepy Hollow.

In my chosen writing genre, Crime, there are several prime examples where the protagonist faces up to malevolent forces from beyond the grave, or is in sympathy with them and even assisted by them.

James Lee Burke’s Dave Robicheaux series, about a Louisiana detective, has his protagonist imagining and, at times, interacting with long-dead soldiers from the Civil War—most notably during In The Electric Mist With Confederate Dead.

John Connolly’s novels featuring a private investigator called Charlie Parker are soaked in supernatural events, so much so, that it’s sometimes tricky to decide who’s alive and who’s dead.

I recently read two of Arnaldur Indridason’s Icelandic crime novels, in which his detective hero is forever tormented by the memory of letting go of his brother’s hand when they were children lost in a blizzard. His body was never found, and from time to time his dead brother visits him as a symbol of how he failed. His brother has forgiven him, but he can’t forgive himself.

In my own Cornish Detective series, my protagonist is a widower, his wife killed in a freak road accident two years before Book 1. In the first two stories, he slid into dark depression clinging to his job as a means of coping. He felt guilty about finding ways to avoid thinking about her, in an attempt to move on. Medication and counselling pulled him through, and in the last three novels, he’s been able to imagine her reaction when he does daft things, how she would have teased him. Her spirit is there to that extent, but she’s not haunting him. I fought shy of adding her ghostly assistance, as there are already enough weird things going on.

I wrote a novella based on my own experiences with the supposedly dead, and a short story in which the protagonist doesn’t comprehend that he’s in a state of limbo between this world and the next, but eerie events in my novels are handled by legends, superstition and the fevered imaginings of drunks, druggies and the insane.

Ghosts needn’t be terrifying. Richard Brautigan created a brilliant spectre in The Hawkline Monster: A Gothic Western an entity that has problems of its own in the form of its rebellious shadow.

When I was a teenager, my father introduced me to the humorous writing of Thorne Smith. His best-known works are the Topper stories, one of which was filmed starring Cary Grant and Constance Bennett. Topper is a stuffy man who’s haunted by a fun-loving couple who lead him into all sorts of compromising situations.

Mind you, I sometimes feel that my muse may be haunting me, sneaking in to do some editing without my permission—as Muriel Spark describes in this poem:

I think that authors’ ghosts creep back
Nightly to haunt the sleeping shelves
And find the books they wrote.
Those authors put final, semi-final touches,
Sometimes whole paragraphs.

Whole pages are added, re-written, revised,
So deeply by night those authors employ
Themselves with those old books of theirs.

How otherwise
Explain the fact that maybe after years
have passed, the reader
Picks up the book – But was it like that?
I don’t remember this . . . Where
Did this ending come from?
I recall quite another.

Oh yes, it has been tampered with
No doubt about it –
The author’s very touch is here, there and there,
Where it wasn’t before, and
What’s more, something’s missing –
I could have sworn . . .

Do you have any ghosts in your stories?

Are they out-and-out terrifying ghosts…or benevolent shades, who assist the protagonist?

Are they scary or amusing? 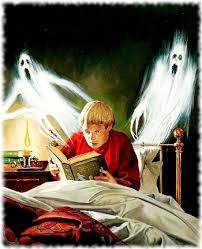